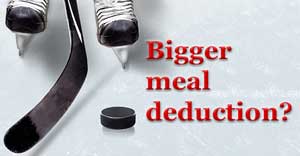 When businesses provide meals to their employees, generally their deduction is limited to 50%. But there are exceptions to the rule. One is if the meal qualifies as a de minimis fringe benefit under the Internal Revenue Code.

A recent U.S. Tax Court ruling could ultimately mean more employer-provided meals will be 100% deductible under this exception. The court found that the Boston Bruins hockey team’s pregame meals to players and personnel at out-of-town hotels qualified as a de minimis fringe benefit.

Qualifying requirements
For meals to qualify as a de minimis fringe benefit, generally they must be occasional and have so little value that accounting for them would be unreasonable or administratively impracticable. But meals provided at an employer-operated eating facility for employees can also qualify.

For meals at an employer-operated facility, one requirement is they must be provided in a nondiscriminatory manner: Access to the eating facility must be available “on substantially the same terms to each member of a group of employees, which is defined under a reasonable classification set up by the employer that doesn’t discriminate in favor of highly compensated employees.”

The meals generally also must be furnished for the convenience of the employer rather than primarily as a form of additional compensation.

On the road
What’s significant about the Bruins case is that the meals were provided at hotels while the team was on the road. The Tax Court determined that the Bruins met the de minimis tests related to an employer-operated facility for their away-game team meals. The court’s reasoning included the following:

If your business provides meals under similar circumstances, you might also be eligible for a 100% deduction. But be aware that the facts of this case are specific and restrictive. Also the IRS could appeal, and an appeals court could rule differently.

Questions about deducting meals you’re providing to employees? Contact us.
© 2017