The Ins and Outs of Tax on “Income Investments” 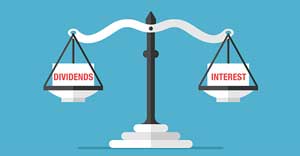 Varying tax treatment
The tax treatment of investment income varies partly based on whether the income is in the form of dividends or interest. Qualified dividends are taxed at your favorable long-term capital gains tax rate (currently 0%, 15% or 20%, depending on your tax bracket) rather than at your ordinary-income tax rate (which might be as high as 39.6%). Interest income generally is taxed at ordinary-income rates. So, tax wise, stocks that pay dividends might be more attractive than interest-paying income investments, such as CDs and bonds.

But there are exceptions. For example, some dividends aren’t qualified and therefore are subject to ordinary-income rates, such as certain dividends from:

Also, the tax treatment of bond interest varies. For example:

One of many factors
Keep in mind that tax reform legislation could affect the tax considerations for income investments. For example, if your ordinary rate goes down under tax reform, there could be less of a difference between the tax rate you’d pay on qualified vs. non-qualified dividends.

While tax treatment shouldn’t drive investment decisions, it’s one factor you should consider — especially when it comes to income investments. For help factoring taxes into your investment strategy, contact us.
© 2017