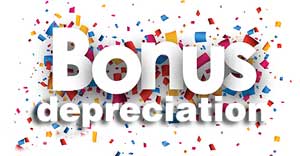 Bonus depreciation allows businesses to recover the costs of depreciable property more quickly by claiming additional first-year depreciation for qualified assets. The PATH Act, signed into law a little over a year ago, extended 50% bonus depreciation through 2017.

Claiming this break is generally beneficial, though in some cases a business could save more tax in the long run if they forgo it. However, 2016 may be an especially good year to take bonus depreciation – something to keep in mind when you’re filing your 2016 tax return.

Now vs. later
If you’re eligible for bonus depreciation and you expect to be in the same or a lower tax bracket in future years, taking bonus depreciation (to the extent you’ve exhausted any Section 179 expensing available to you) is likely a good tax strategy. It will defer tax, which generally is beneficial.

But if your business is growing and you expect to be in a higher tax bracket in the near future, you may be better off forgoing bonus depreciation. Why? Even though you’ll pay more tax for 2016, you’ll preserve larger depreciation deductions on the property for future years, when they may be more powerful — deductions save more tax when you’re paying a higher tax rate.

Making a decision for 2016
The greater tax-saving power of deductions when rates are higher is why 2016 may be a particularly good year to take bonus depreciation. With both President Trump and the Republican-controlled Congress wishing to reduce tax rates, there’s a good chance that such legislation could be signed into law.

This means your tax rate could be lower for 2017 (if changes go into effect for 2017) and future years. If that happens, there’s a greater likelihood that taking bonus depreciation for 2016 would save you more tax than taking all of your deduction under normal depreciation schedules over a period of years.

If you’re unsure whether you should take bonus depreciation on your 2016 return — or you have questions about other depreciation-related breaks, such as Sec. 179 expensing — contact us.
© 2017